A Guide to Guernsey’s Cultural Heritage

All information in this blog post is correct as of the publishing date,  03.05.19.

It may be most popular for its lovely coastal scenery and fine cuisine, but anyone with an interest in art, literature and history will be pleased to learn that Guernsey has a rich heritage when it comes to all things cultural – and, just as importantly, it’s a legacy that is safeguarded and celebrated to this day. Below, we will explain how the island’s cultural significance matches that of all the other Channel Islands, and how those who wish to can immerse themselves in it when they visit.

Booking one of our Guernsey holidays by ferry will allow you the luxury of discovering our island in the comfort and convenience of your own car, giving you the time that’s needed to really explore every corner of this varied, beautiful and historic destination.

We mentioned above that Guernsey is renowned for its stunning landscape and that its dramatic coastline is where visitors tend, understandably, to be drawn to more than any other part of the island. The appeal of our golden beaches and rolling seas is nothing new, however, and art connoisseurs may already know that the place we call home was, in fact, a source of inspiration for one of the finest and most influential painters of all time.

In the summer of 1883, Pierre-Auguste Renoir – who, along with Claude Monet, is widely regarded as the father of the Impressionist art movement – travelled to Guernsey and stopped here for over a month. His stay may have been relatively brief, but it was still incredibly fruitful: in around 30 days, Renoir completed no fewer than 15 paintings!

Although we recommend that you explore as much of Guernsey as you can whilst on the island, it must be acknowledged that Renoir himself appears not to have ventured far from where he was based at lodgings in the capital of St Peter Port. A short walk from the artist’s accommodation would have taken him to the beautiful Moulin Huet Bay, which features prominently in the work that was produced during this prolific period. 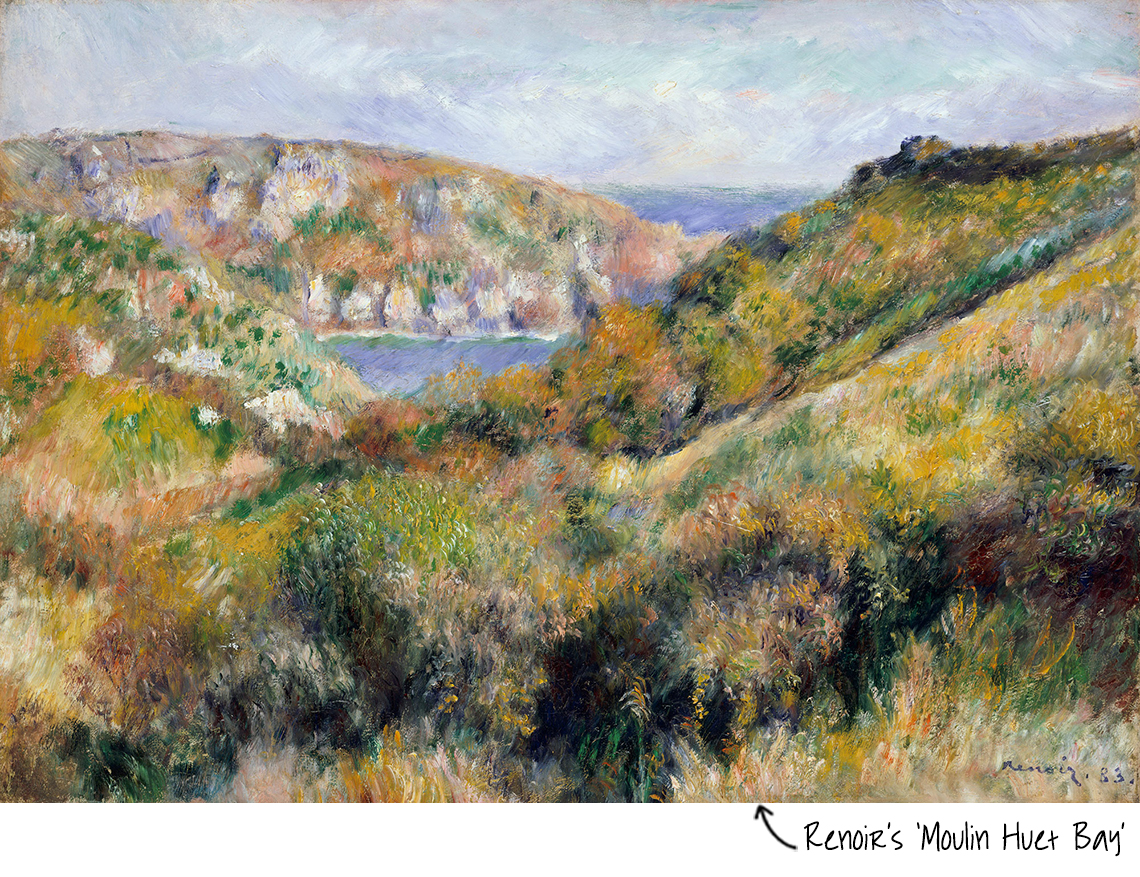 It’s easy to see why Renoir didn’t want to stray from this picturesque, secluded cove in the parish of St Martin once he’d found it. The Caribbean-esque turquoise waters that gently lap the small shingle beach and amazing views of the surrounding cliffs are like a readymade masterpiece, so the pull of this hidden gem was irresistible for the master artist.

Renoir, of course, is far from the only creative genius to have been inspired by Guernsey’s incomparable scenery, and the island’s museums and galleries host plenty of permanent and temporary exhibitions showcasing the fruits of our artistic heritage. Of all the locally-born painters and sculptors who have stood the test of time, probably the most enduringly popular is Peter Le Lievre, whose exceptional watercolours can be discovered in the Rona Cole Art Gallery at the Guernsey Museum. 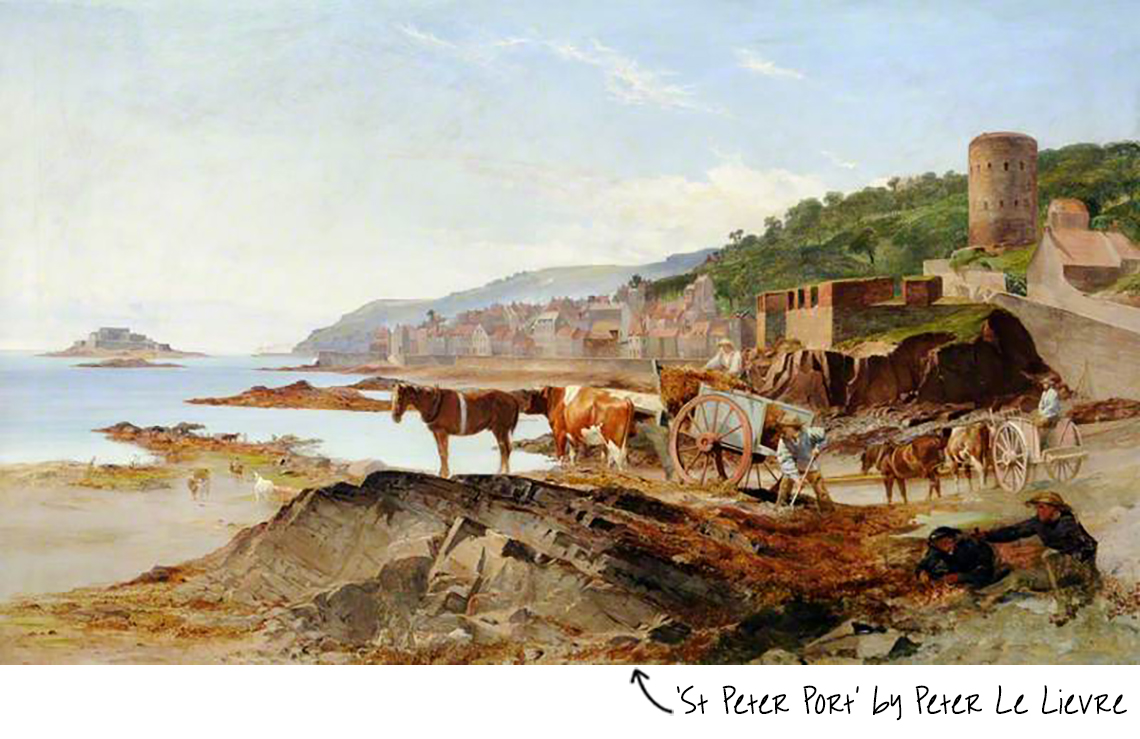 If we were to tell you that Guernsey is where one of the greatest and widest-read novels of all time was written, you should get a fair idea of just how rich the island’s literary heritage is. As with many of its achievements, Guernsey punches above its weight when it comes to the feats of its authors, with the number of significant works either written or based here totally disproportionate to its 25-square mile size.

You may already be aware that Victor Hugo, arguably among the most accomplished novelists the world has ever seen, spent 15 years in Guernsey whilst he was in exile from his homeland of France, and that Hauteville House, where he lived and wrote, can still be visited by the public today. You may not have known, however, that his panoramically-glazed sea-view writing room on the top floor is where the epic Les Misérables was penned, along with several of Hugo’s other best-received works.

Long after he left Guernsey, Hugo still felt a strong connection with the island and its residents, and his gratitude for their hospitality was what inspired him to write Toilers of the Sea, a novel that is set entirely in the place that acted as both his refuge and home for so long. Following the life and love of a native Guernsey fisherman, this book continues to thrill new generations of readers and has been turned into films on several occasions. Anyone who has read and enjoyed Toilers of the Sea will also be excited to hear that another adaptation – the first since 1953 – is currently in the works, with director David Shanks confirming in February 2019 that filming was imminent and that the stunning Guernsey coastline itself will be used as much as possible.

Other literary achievements which have their roots in Guernsey include the poetry and stories of Denys Corbet and Marjorie Ozanne (who both wrote in their native Guernésiais language) and The Book of Ebenezer Le Page, Gerald Basil Edwards’ much-loved fictional autobiography of an archetypal Guernsey fisherman.

However rich a location’s heritage may be in any given discipline, though, it can only count for so much if it is not preserved and recognised by the generations that follow. Fortunately, Guernsey has always been rightly proud of the successes it has enjoyed in the fields of art, literature, sport and more, and anyone who visits today will be able to learn a great deal about the island’s varied and impressive past.

There are several excellent museums and heritage sites in Guernsey that you can choose to explore if you wish, each of which focuses on distinct aspects of local history. Here are some brief summaries of three of the most popular:

Guernsey Museum & Art Gallery – Found within the picturesque Candie Gardens in St Peter Port, this museum celebrated its 40th anniversary in 2018. Various themed rooms and exhibitions delve into every chapter of Guernsey’s extensive history, whilst hundreds of important local artworks can also be studied.

Castle Cornet – If you like museums, then Castle Cornet should go straight to the top of your must-visit list when you arrive in Guernsey. There are no fewer than five museums to be explored in and around this 800-year-old building, covering topics such as the island’s maritime past, its military connections, and the story of the castle itself.

Fort Grey Shipwreck Museum – Known locally as the ‘Cup and Saucer’, the Fort Grey Shipwreck Museum is housed within a Martello tower that was originally built to defend Guernsey against French invasion. Today, you can visit the museum to learn more about the many vessels that have become stricken on the island’s treacherous west coast, with informative written commentary complementing the many genuine artefacts that have been recovered from the centuries-old wrecked ships and are now presented in fascinating displays.

For detailed information on some of the finest heritage landmarks that you can discover in Guernsey – including Hauteville House and Castle Cornetto read our blog on 4 Unmissable Guernsey Landmarks.