All information in this blog post is correct as of the publishing date,  19.03.20.

Many events in Guernsey are currently under review. We will endeavour to keep this information up to date, however we advise checking directly with the event organisers.

If you’re planning a holiday to Guernsey in 2020, you’ll be pleased to know there is always plenty happening on the island for visitors of all ages to enjoy.

Before you decide when to book your trip, have a look at our guide which will give you more information on the most anticipated festivals taking place in Guernsey over the next 12 months. Some of the events could be perfect for you and your family!

Every year, Guernsey holds a heritage festival, where the islands heritage attractions open their doors and hold special events over several weeks, coinciding with Liberation Day in May. However, in 2020 it is Guernsey’s 75th liberation anniversary and there will be 75 unique heritage-themed events taking place between April and October, starting from 1st April, under the banner of Heritage 75. Many of the events are child-friendly too, and a great way to educate and entertain your children on holiday.

The Guernsey Literary Festival has established itself as one of the island’s great art events, having grown from strength and strength in recent years and welcoming several famous authors. At the events held around St Peter Port, attendees can enjoy talks, readings and workshops from the guest authors, and there will also be slam poetry and music performances on some evenings. The Festival also holds competitions so visitors can get involved.

Liberation Day (9 May) – Liberation Events are under review for 2020

The Nazi Occupation of Guernsey during World War II was one of the darkest periods of the island’s history. However, Liberation Day celebrates the freedom achieved and enjoyed in the Channel Islands over the last seven decades, and for the 75th anniversary in 2020, you can expect the celebrations to be bigger than ever on the 9th May. There are parades, a military band, family entertainment and fireworks to finish off the day.

Exploring Guernsey’s coastline and the countryside is something to experience all year round, but the island’s beauty comes into its own during the spring, which is why the Spring Walking Festival is a huge draw. There are dozens of guided walks to introduce ramblers to Guernsey’s stunning landscapes and fascinating heritage. 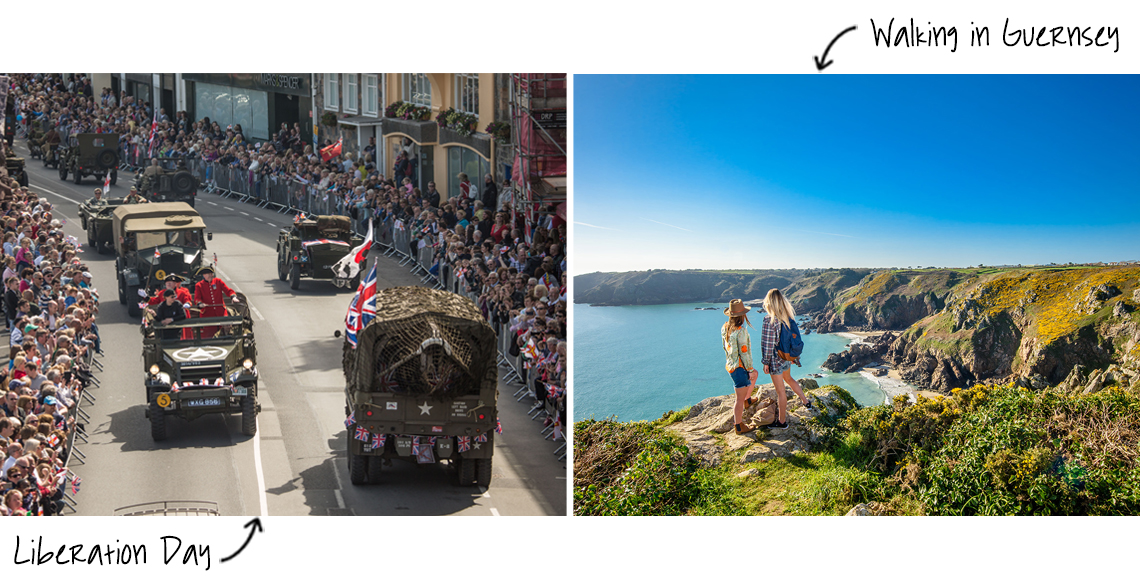 For some classic, family-friendly seaside entertainment when you’re on holiday to Guernsey, you can do no better than the Rocquaine Regatta. The jam-packed day will see everything including boat races, apple bobbing, wheelbarrow races and an evening barbecue. The regatta takes place in and around Rocquaine Bay on the island’s west coast, and the boat races are an exciting highlight, as sailing, fishing and motorboats take part in a fun but competitive races!

If you have ever been to an agricultural show, this should give you an idea of what to expect at the fantastic West Show. It is one of Guernsey’s longest-established events and features all you would have at a traditional county show. There are livestock competitions, live music, fairground rides, food stalls, lawnmower racing and more. In 2019, the event saw a motorcycle display team perform daring stunts and you can expect the West Show in 2020 won’t disappoint!

Held just one week after the West Show is the North Show and Battle of Flowers, another fantastic family-friendly event with an agricultural theme. There is a wide range of animal, craft and horticultural displays from local talent as well as entertainment from off the island. The highlight of the North Show is the Battle of the Flowers, where spectators can help judge colourful floats which are competing for the Prix d’honneur. 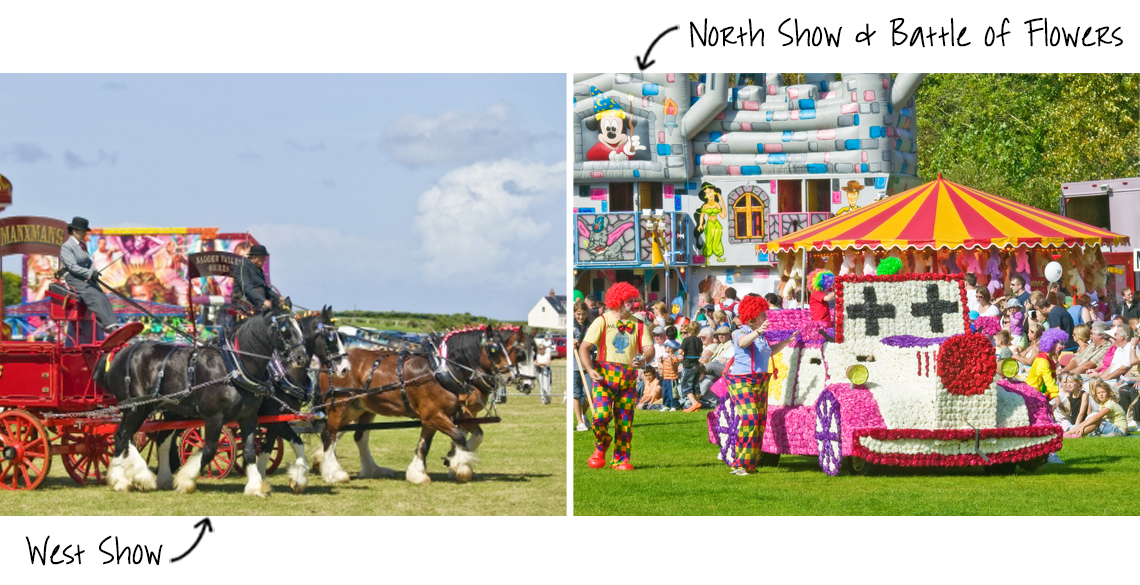 The island’s skies will come to life in September with the Guernsey Air Display. It’s free to watch, and the air show includes an impressive display of Spitfires, Lancasters and other legendary planes. The highlight of the day is the closing display from the iconic Red Arrows team, seeing them move through the skies, doing loop-the-loops and creating colourful smoke trails is a sight that will never be forgotten.

The beautiful foliage and comfortable temperatures have led many people to name autumn as an even better time for a ramble on Guernsey than spring. The Autumn Walking Festival gives visitors another chance to explore on informative guided walks and see another side of the beautiful island in autumn colours. Like the Spring Walking Tour, there is also an opportunity to visit Alderney and Sark.

Guernsey still has an undeniable charm in the colder months, especially when it comes to the culinary scene. Tennerfest, which is six weeks long, is the perfect opportunity to sample the island’s best food from various restaurants, cafés and local food producers. The businesses taking part will offer amazing three-course meals for just £10 per head, with £12.50, £15, £17.50 and £20 options also available.

During your visit, why not plan on visiting one of the other islands in the bailiwick, such as Alderney, Herm or Sark? They can be reached by daily passenger ferries and each host their own brilliant annual events.

Alderney hosts its Performing Arts Festival in May, welcoming up-and-coming artists showcasing their talents in a range of mediums, with a big focus on music.

Alderney is proud of the wealth of dairy, meat and seafood it can offer visitors, and rightly so. In the first week of July, visit the island to be treated to a celebration of its finest food and drink. 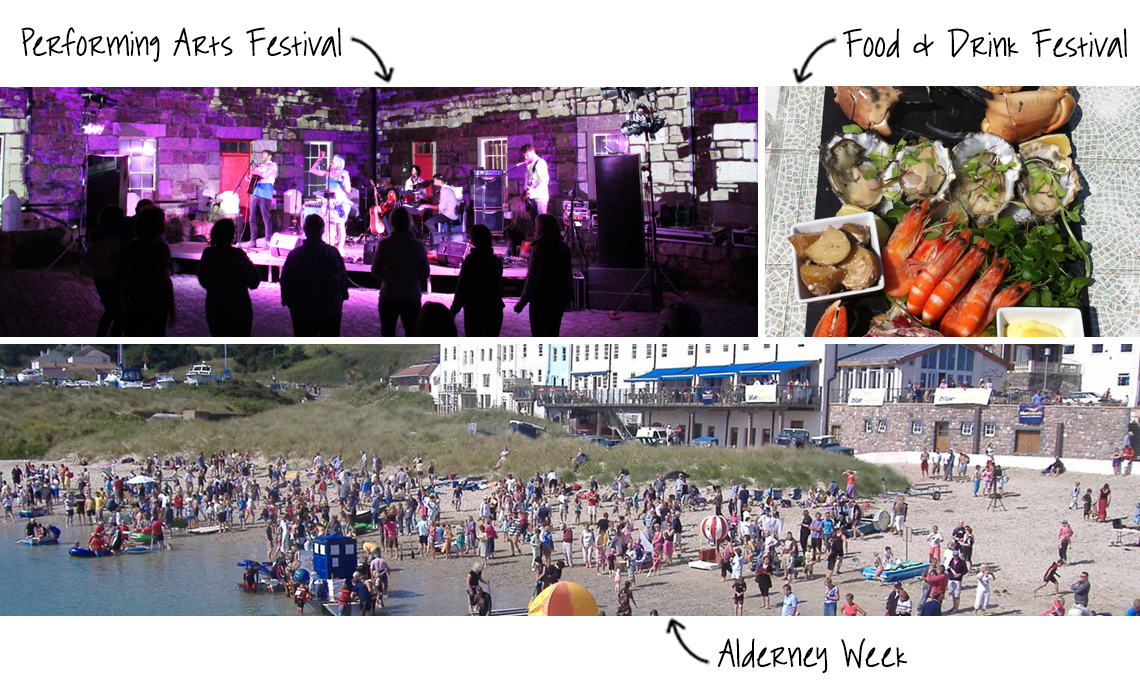 Alderney Week is the Channel Island’s biggest carnival and community festival. There will be entertainment for the kids, live music, the ever-popular daft raft race, torchlight procession and much more to enjoy!

For fans of real ale and cider, visit the Mermaid Tavern on Herm when it hosts its annual festival, where there is also a gin menu, champagne bar and live music. The September festival will be a little different as it will also feature Scottish cask ales, gin and food.

Previous post The Best Places for a Luxury Spa Break in Guernsey
Back to Blog homepage
Next post Green Guernsey: Enjoying an Eco-Friendly Holiday