IMPORTANT: Updated 27th July. Guernsey is open to fully vaccinated arrivals from the UK.
Visit our coronavirus page for full details of travel requirements and restrictions. 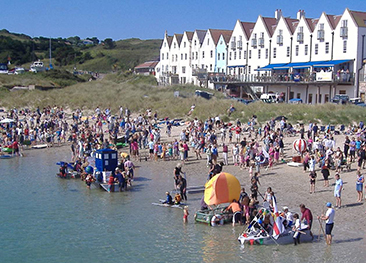 Every August, Alderney plays host to the biggest annual carnival in the Channel Islands. Imagine over 130 events across one madcap extended week and you have, Alderney Week.

Every August, Alderney plays host to the biggest annual carnival in the Channel Islands. Imagine over 130 events across one madcap extended week and you have, Alderney Week.

The week includes seven days of non-stop fun, music, entertainment, sports, medals, trophies and prizes. The week culminates in the famous Alderney Torchlight Procession, in which 2,000 torchbearers parade through the town of St. Anne – something you definitely won’t see in any of the other Channel Islands!

The carnival begins with the annual “Cavalcade Day”, where decorated carts and floats make their way through the town in the ever popular, noisy and colourful parade. Family favourites such as the Daft Raft Race, the Manpowered Flight and the Wednesday Night Gala Spectacular, all an appearance – and absolutely free!

Alderney Week has come a long way since its days as a village fayre, with the festival drawing visitors from near and far to Alderney, nearly doubling the Island’s 2,400-strong population throughout the week. 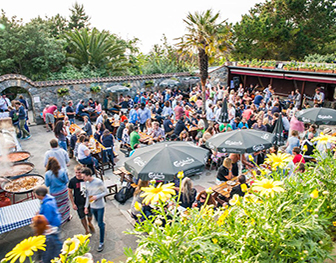 Experience this niche festival in a beautiful setting. With more than 60 real ales and ciders to try, and live music on some of the evenings.