Gin in Guernsey – The History & Production of Guernsey Gin

The Islands of Guernsey may be famed for many things; beautiful coastlines, the occupation during World War 2, Guernsey Gâche (a rich fruit bread) and even being home to French writer Victor Hugo, but lately Guernsey is gaining prestige as a manufacturer of excellent Guernsey Gin. There are now several manufacturers on the Island, creating wildly different and wonderful spirits and other alcohols, such as Rocquettes Cider & Blue Mantis Vodka. Long gone are the days of the Islands simply making products to be picked up by visitors because the word ‘Guernsey’ was printed on the label. Today, spirits are being made in earnest throughout the Channel Islands that rival or even surpass some of the world’s biggest brands!

A quick history lesson on gin before we talk about Guernsey’s up-and-coming products, Gin is essentially Juniper flavoured vodka. Obviously, other flavours can be included, but it MUST contain Juniper and be over 37.5% alcohol. You could take any bottle of gin, take out the Juniper, and it would no longer be gin, it would just be flavoured vodka! Originally from Holland, but made under the name Genever (Dutch for Juniper), this spirit found its way to England in the 1700’s and quickly became the most consumed liquid in the country. In fact, by the year 1720, some experts estimate that as many as a quarter of the households in London frequently produced their own gin.

The gin obsession was blamed for misery, rising crime, madness, higher death rates and falling birth rates. Gin bars allowed women to drink alongside men for the first time and it is thought this led many women neglecting their children and turning to prostitution, hence gin becoming known as ‘Mother’s ruin’. Luckily times change, and Gin can now be produced safely by talented distillers and Guernsey, is apparently full of them.

Several distilleries have popped up around the Islands of Guernsey, each with their own identity and take on locality. The first of these distilleries to find itself pouring gin into the glasses of Guernsey locals was Wheadon’s Gin. Brain child of distiller Luke Wheadon, and distilled in the basement cellar of the 4* Bella Luce Hotel, Wheadon’s is now the best-selling gin in Guernsey, outselling Gordon’s, Bombay Sapphire and even Hendricks. Available in a range of expressions, Wheadon’s gin includes a local ingredient in each bottle. The first iteration was the Rock Samphire & Pink Grapefruit. The Rock Samphire is the local ingredient that is hand foraged from the cliffs and sea walls around the Island before being brought back to the Bella Luce to be turned into this fabulous gin. Originally intended to create the perfect G&T, the bitter-sweet pink grapefruit juxtaposes the deep minerality of the rock-samphire creating a wonderfully smooth and palette refreshing drink!  Other iterations include a Mandarin-Lime & Hibiscus and a Yuzu, Lemongrass & Green Tea. For Christmas 2020, a special edition expression called the ‘Three Kings Blend’ was produced and distilled from Frankincense & Myrrh resin and finished with gold leaf. Wheadon’s has recently become part of the Channel Island Liquor Company and a second distillery has been set up in St. Helier, Jersey. The distilleries will work together on creating a pan-Channel-Island brand, continuing to use local ingredients from both Islands and become a truly recognisable force when it comes to Island-made spirits. Gin tasting and tour experiences can be booked at the Bella Luce hotel as well. Luke Wheadon will talk you through his distillation methods and the history of Gin as you sample each of his wonderfully special gins in the comfortable and cosy basement cellar distillery.

Another gin that has come to market in Guernsey is Blue Bottle Gin. Created by head distiller, Matt, whose interest in Gin and passion for the craft of distilling was rewarded when he was made a Scholar and Freeman of the Worshipful Company of Distillers. Blue Bottle is the culmination of many years of commitment to refining detail. Matt has immersed himself in research into the history of gin, undertaken extensive taste testing, sourced premium botanicals from across the globe and evolved numerous prototypes to ensure that Blue Bottle gin is a truly hand-crafted reflection of his passion and attention to detail. Flavour-wise, traditional juniper is here but doesn’t dominate. Astute drinkers will appreciate the tropical scent of local gorse flowers, be cosseted by the sweetness of nutmeg and luxuriate in a hint of cubeb pepper. 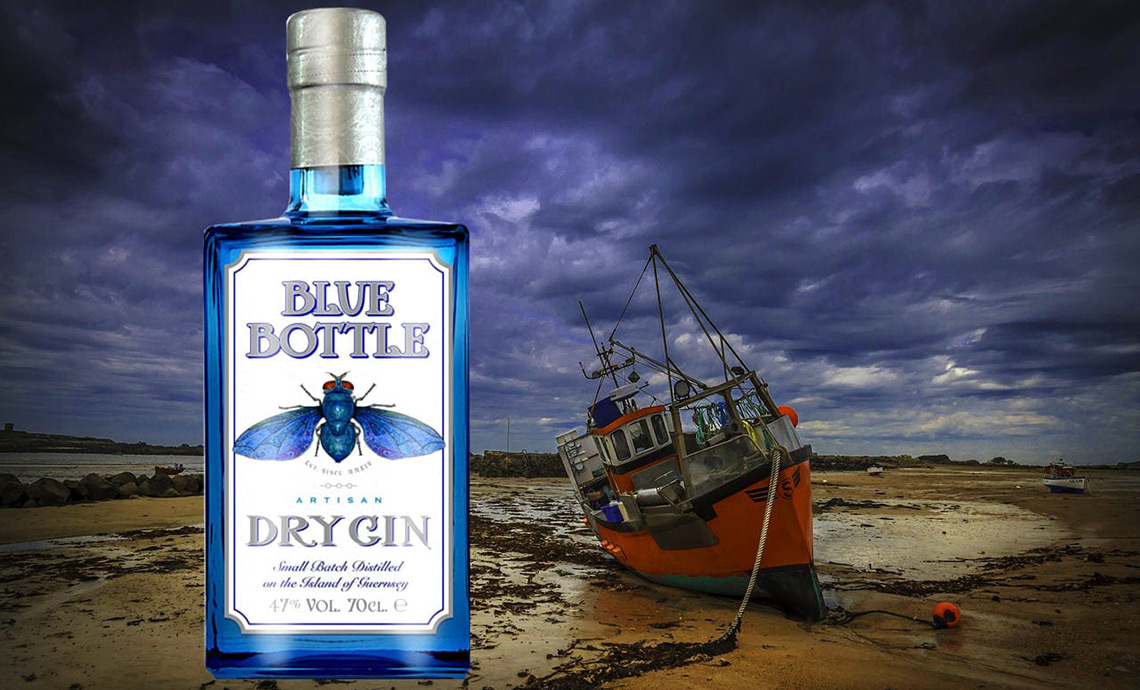 Both of these brands can be found locally in Guernsey and throughout the Channel Islands as well as bought in the UK through www.masterofmalt.com.

Previous post Walking in Guernsey
Back to Blog homepage